Did an Italian Youth Save an American Man’s Life — from Heaven? 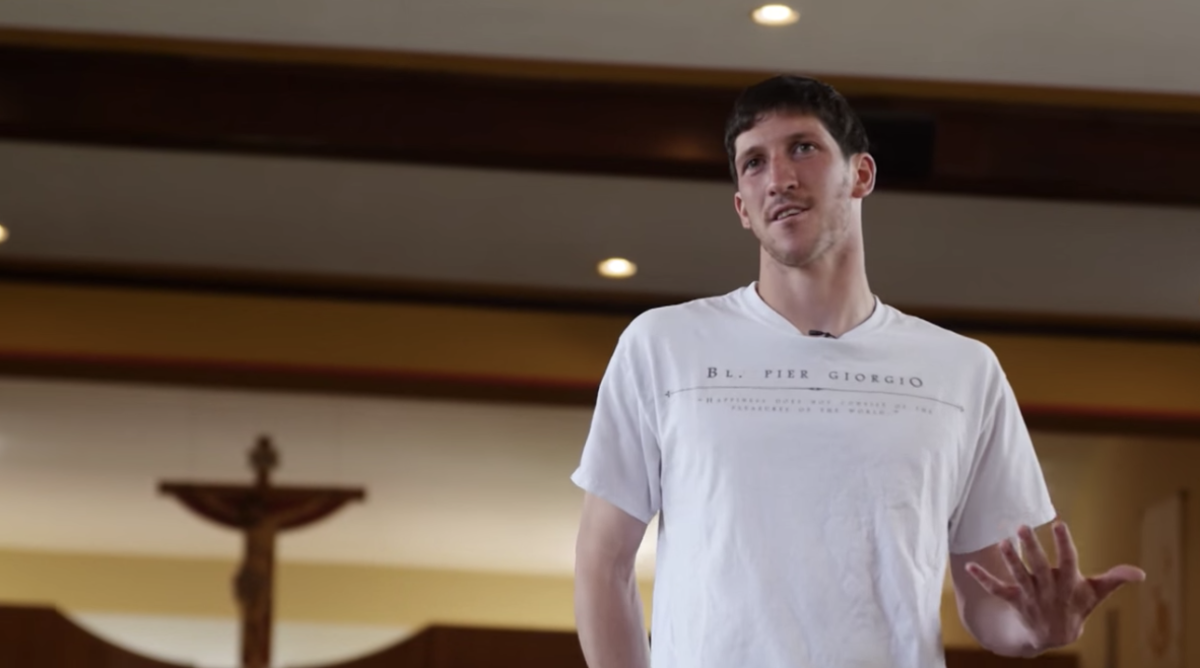 Tall, young, and obviously athletic, Kevin Becker seems a completely normal and healthy man in his late 20s. Yet, little more than seven years ago, Kevin almost died in a debilitating fall.

Today, he stands unscathed and with no markings of that injury — a feat he contributes to the miraculous intercession of Blessed Pier Giorgio Frassati and which might lead to Frassati’s canonization.

In short, he seemed a normal, healthy man; there was nothing to betray that, less than 10 years before, the fall had shattered his skull in five places and left him next to dead.

In 2011, the Friday before he was to start his final year at East Stroudsburg University of Pennsylvania, Becker stepped out onto the roof of his two-story college house, a place where he had often spent time, enjoying the occasional cigar and scotch while gazing at the stars.

Kevin doesn’t remember what brought him to the roof that evening, nor does he remember the fall. He was found on the ground by his friends and girlfriend, his head fractured and his body broken.

When Kevin’s family received the phone call that their son was in the hospital, comatose and near death, they were dumbstruck. They had just felt the first shocks of Hurricane Irene and were daily fearing news that Kevin’s uncle or grandmother, both desperately sick, had died.

They were not expecting to be whisked to a hospital in Pennsylvania, where they were told that their son had only a 30 percent chance of survival — a survival that would leave him in a vegetative state.

“I want it to be yesterday,” Kevin’s mother, Jeanmarie, recalled thinking.

On the fifth day after the injury, Kevin’s condition had plummeted. The doctors explained to his mother that their only option would be to place him in a deeper coma, in the hopes it would reduce brain pressure. The chances of the procedure working and Kevin exiting the coma were near impossible — his survival was left in the hope of a miracle.

Kevin Becker in the ICU in 2011 (screenshot from YouTube)

“On this day, [Kevin’s cousin] had had a friend … who was ordained a Catholic priest,” Jeanmarie explained, “and at his ordination, he spoke of Blessed Pier Giorgio Frassati and shared his story with her and the congregation.”

“And she said, ‘Well, he’s a young athlete,’ ” Jeanmarie continued, “…well, maybe he [Kevin] could be the miracle for him to become a saint.”

That day, Kevin’s family began a novena to Frassati and placed an image of the young man in Kevin’s room.

“On this day, he stabilized,” said his mother.

By day three of the novena, Kevin was able to open his eyes. By day 13, he was released from the ICU, walking and talking — he who, little more than a week earlier, was expected to be perpetually comatose, at best. The doctors were dumbfounded; even then, talk circulated about a miracle.

Kevin was talking, too, though about an angel, not a miracle.

While his family was rushing to the hospital, Kevin recalled waking up in what appeared to be his college house. There was, however, one large difference — a man whom Kevin had never met before.

“I’m your new roommate,” Kevin recalled the man saying, whom he later described as an angel. “My name is George.”

With George’s help, Kevin went about putting his house in order — building furniture, painting walls, and other moving activities. During breaks, he and George would play some video games. All of this happened in what Kevin described as one unending day — a day that slowly drove Kevin stir-crazy. He attempted to leave the house but was stopped by George.

“I will let you know when it is safe to leave.”

The next thing Kevin remembers is waking up at the hospital, unsure where he was or how he got there. He was out of the coma, stable, and on his way back to full and miraculous health.

A week after being dismissed from the ICU, Kevin returned home, a full bill of health absent the broken bones still mending. The doctors were flabbergasted, but to Kevin it all made sense — he had been accompanied by his angel, by George, about whom he spoke incessantly to both his mother and younger brother.

Kevin continued discussion of this angel who had accompanied him throughout his recovery, which spurred a thought in his mother’s mind.

“Finally, I kind of thought about it, and I thought of Pier Giorgio,” Jeanmarie said. “And I said to Kevin, ‘Kev, if I showed you a picture of this angel, do you think you could put a face to it?’ ”

She found the image of Frassati, the one that had been placed in the ICU unit, and showed it to Kevin for the first time. 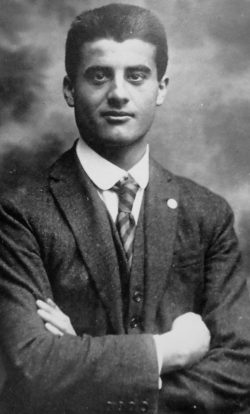 “The picture was out in the ICU unit, but once we left the ICU unit, the picture went away. We didn’t have room for it in the step-down unit,” Jeanmarie explained, “so he really didn’t see it.”

“That’s the son of a b**** who was with me. That’s him,” Kevin allegedly stated, still frustrated that “George,” now identified as Frassati, had kept him cooped up in an ephemeral house for so long.

This identification solidified for both Kevin and his mother what many were already suspecting — Kevin’s miraculous healing came through the intercession of Blessed Pier Giorgio Frassati.

In thanksgiving for the perceived miracle, Kevin and his mother now travel around the country — to parishes, schools, youth groups, anyone who will listen — to tell their story and spread devotion to Frassati.

Giorgio was, in many ways, like Kevin. He, too, was young, college-educated, and exceptionally athletic — mountain climbing was one of his favorite activities. He also loved Dante, the theater, and the opera, and was active in a political movement known as the “People’s Party,” which based its political ideas on Pope Leo XIII’s encyclical “Rerum novarum” (“Of the New Things”).

More than all of these pastimes, Frassati had an intense love for others, filling up his little free time with service to the poor of Turin. FrassatiUSA, the official U.S. website for his cause, claims that, “just before receiving his university degree, Pier Giorgio contracted poliomyelitis, which doctors later speculated he caught from the sick whom he tended.”

At his funeral, the multitude of poor and needy whom Frassati has served with love lined the streets of the city.

In 1990, St. Pope John Paul II beatified Frassati. During the beatification ceremony, he cited the young man’s intense faith and prayer life as the foundation of his holiness and charity:

“The secret of his apostolic zeal and holiness is to be sought in the ascetical and spiritual journey which he traveled,” the pope said, “in prayer, in persevering adoration, even at night, of the Blessed Sacrament, in his thirst for the Word of God, which he sought in biblical texts; in the peaceful acceptance of life’s difficulties, in family life as well; in chastity lived as a cheerful, uncompromising discipline; in his daily love of silence and life’s ‘ordinariness.’ ”

In 1981, Frassati’s remains were exhumed and found to be incorrupt, interpreted by many faithful as a sign of his sanctity. His body was then moved to the cathedral in Turin, and his remains often travel to the site of World Youth Day, of which John Paul named him patron.

The story of Frassati has captured the attention and devotion of more than just Kevin and his mother. In 2017, more than 1,500 people from more than 50 countries petitioned Pope Francis to canonize the young man.

Though Frassati is, as of yet, not a saint, Kevin and his mother have hope that he soon will be — thanks to his intercession for Kevin’s miraculous healing. All documentation of Kevin’s injuries and miraculous healings have been submitted to the Vatican’s Congregation for the Causes of the Saints.

“We’re at the finish line,” Jeanmarie said. “Hopefully we get the good news soon, that it is a miracle, and that he will finally be lifted to where he should be as a saint.”