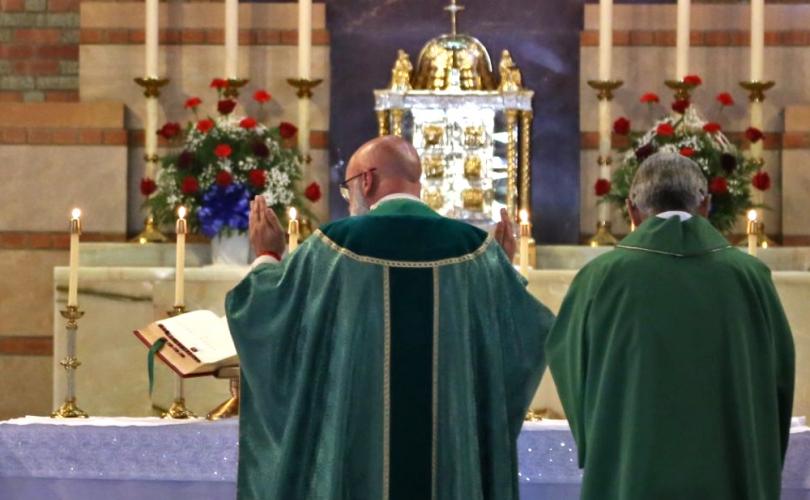 I want to share with you some of what I hope will be helpful catechesis with regard to a topic some of you are familiar with, while others may not be: Ad Orientem Worship.

The Latin Term, Ad Orientem, means, literally, “to the East,” and in the liturgical context, means “to the Liturgical East” — that is, that the action and focus of the celebrant and congregation, together, is directed toward the altar. Because it is not always possible or practical to build every church so that the altar is located at the geographical east, by tradition, we call the end of the church where the altar is located, the “Liturgical East.”

So, again, in short, in this context Ad Orientem means that the priest, deacons, servers, and lay faithful, together face the same direction — toward the altar (and ideally, toward the Blessed Sacrament in the tabernacle).

Those of you who regularly attend Mass here on the First Saturdays of the Month have likely experienced Ad Orientem worship, as we have done this several times over the last 2 years.

Cardinal Robert Sarah, prefect of the Congregation for Divine Worship and the Discipline of the Sacraments, a “department” of the Curia at the Vatican, is a great proponent of Ad Orientem worship, and has been encouraging all priests and pastors to make it available in every parish.

So, what is the history of Ad Orientem worship?

In the ninth century, Saint John of Damascus, a Doctor of the Church, wrote:

“It is not without reason or by chance that we worship towards the East…Since God is spiritual light, and Christ is called in the Scriptures Sun of Righteousness and Dayspring, the East is the direction that must be assigned to His worship.

…Moreover the Scripture also says, And God planted a garden eastward in Eden; … Moreover the tent of Moses had its veil and mercy seat towards the East. Also the tribe of Judah as the most precious pitched their camp on the East. Also in the celebrated temple of Solomon, the Gate of the Lord was placed eastward.

…And, as the Lord Himself said, As the lightning cometh out of the East and shineth even unto the West, so also shall the coming of the Son of Man be. So, then, in expectation of His coming we worship towards the East.”

Monsignor Charles Pope, of the Archdiocese of Washington, D.C., wrote in 2016:

“The thought to face east for the Eucharistic Prayer is not merely the latest rage. It has been under consideration at least since the mid-1980s when new research indicated that facing east was in fact the near-universal norm of the ancient Church.

No less that Cardinal Joseph Ratzinger (later, Pope Benedict XVI) wrote extensively on the topic back in the 1980s in his book The Feast of Faith. Fr. Michael Uwe Lang published a widely read book (Turning Towards the Lord) as well.

Increasing use of the ad orientem option has been taking place throughout this period. Certain dioceses in this country, such as Lincoln and Tulsa, have given explicit encouragement to the practice.

Similar movements are taking place in other parts of the world and ad orientem has been the topic at many liturgical conferences throughout the world.

Properly understood, Ad Orientem worship should not be seen or described as “the priest turning away from the people,” rather—as “the priest and congregation together facing the Lord’s altar and tabernacle.”

The use of Ad Orientem worship can help to rekindle a deepened spirit of reverence in the celebration of the Holy Mass.